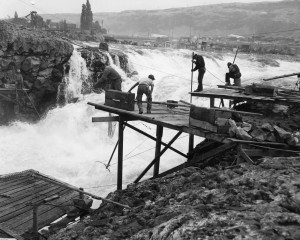 Before the time of the treaties, the Tribes governed themselves. While laws were not written, they were well understood in the customs and culture. There were far fewer people then and life was much simpler.

With the Treaty came a new and different relationship. In this relationship the Tribe kept many of its powers of self-governance but also agreed to accept the government of the United States and its applicable laws dealing with Indian Nations.

One of those laws, referred to as the Indian Reorganization Act, set out a process for Indian Nations to establish more formal governments to assist them in carrying out business and managing their affairs. The Warm Springs, Wasco and Paiute people chose to utilize the opportunities available under the law and organized themselves under the Tribal Constitution. The people referred to themselves and their government as the Confederated Tribes of the Warm Springs Reservation of Oregon. The first provisions of the Constitution set out the purpose of the Tribal Government and some broad goals.

The Tribe also adopted a Corporate Charter that gave the Tribe status as a federally chartered corporation. This charter recognizes the Tribe as a business entity and sets out rules for doing business.

The Constitution and Corporate Charter are referred to as the “Organic Documents” of the Tribe in that they organize the Tribe for conducting business as a government. Taken together with the Treaty and a number of federal laws, the Organic Documents provide a broad framework within which the Tribal Council, as the governing body of the Tribe, carries out its legislative role.